New Jersey native William Basso grew up in a home, surrounded by art, courtesy of his parents, who were both artists. After graduating with a degree in illustration from Parsons School of Design, he moved to California to work on special effects in the movie industry, lending his talents to such blockbusters as Jurassic Park, Terminator 2, Edwards Scissorhands.

Influenced by comics, horror and Renaissance and Eastern European art, his artwork is a combination of mixed media including drawing, sculpture, and photography, among others. Vivid in detail and heaving with emotion, Basso’s art tells stories though his character creations, not unlike something you’d find in a stage play.

Why we love them: Basso’s ornate art usually incorporates light, pale or soft colors, which slowly draw viewers into his strange and creepy world, which is sometimes gruesome, but not jarring or in your face. It’s a subtle morbidness that allows our lingering curiosity to play out naturally. 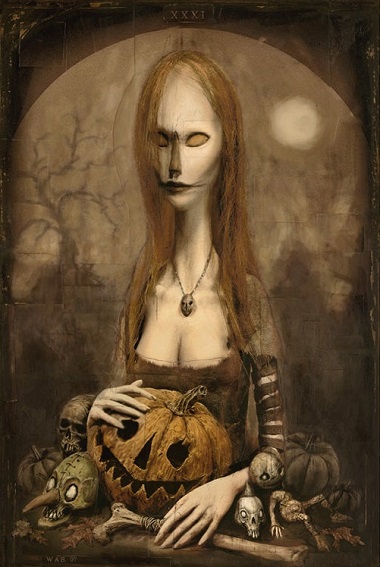 I left out my favorite Christmas pillar candle all year long and the summer heat melted it earlier this year. It's still kinda cute though.😅
A lump of coal is too good for this naughty snowman.
Monster snowflake. Already missed a day in my own photo challenge. Well, expected!😅
New haiku is up! Happy December! Welcome to the haunted holidays. Check out my latest post for explanation of our theme this month.
Kicking off the 2022 Christmas gift-giving guide season with 7 gifts that don’t suck for vampire fans.
I dont have a big tree but they didn't stop me from setting out #ornaments. Here are my HauntedMansion Hitchhiking Ghosts and HeadlessHorseman ornaments