The beauty of creating your own playlist vs. listening to someone else’s is that you’re guaranteed to LOVE every song. With the variety of hosts and methods available, it’s super easy to create your own playlists these days. The real problem lies in finding the time to research a good variety of songs. So, I thought I’d help out with a little playlist of my own Halloween faves.

The Ghost of Smokey Joe by Cab Calloway

I Want to be Evil by Eartha Kitt

Poison Ivy by the Coasters 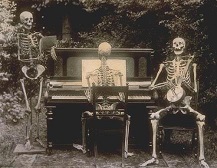 Monster Mash by Bobby ‘Boris’ Pickett and the Crypt-Kickers

Riboflavin-Flavored, Non-Carbonated, Polyunsaturated Blood by Don Hinson and The Rigamorticians

Martian Hop by the Randells

I Put a Spell on You by Screamin’ Jay Hawkins

Love Potion #9 by The Searchers

Little Red Riding Hood by Sam the Sham and the Pharaohs

Devil in a Blue Dress by Mitch Ryder

Sympathy for the Devil by The Rolling Stones

Devil Went Down to Georgia by Charlie Daniels Band

Werewolves of London by Warren Zevon

Magic by The Cars

Somebody’s Watching Me by Rockwell

Ghost Town by The Specials

Devil Inside by INXS

Pet Semetery by The Ramones

The Munsters Theme by Los Straitjackets

Werewolf by Southern Culture on the Skids

This is in no way a comprehensive or ‘best of’ list. I’m just hoping to inspire people to put together their own awesome Halloween playlist and encourage younger music lovers to continue listening to the great music of years past.

One thought on “Halloween Playlists”