It’s that time again. Time for all the kiddos to go back to school. Hollywood has long picked on teens to sell their worst nightmares to the delight of horror fans all over the world. Just when you thought there was nothing scarier than teenage angst and rampant acne, here’s ten Back to School thrillers that will make you glad that you’ve already graduated.

Chance of being killed is absolutely a good reason to skip the prom.

Four high schoolers, who made a pact in grade school never to reveal their involvement in the accidental death of a friend, are stalked by a masked killer on Prom Night, the anniversary of the death.

Unless you’re a diehard Idris Elba fan (which I am), I suggest watching original over the 2008 version. With Halloween and The Fog under her belt, star Jamie Lee Curtis secured the title of Scream Queen with Prom Night. The movie’s disco soundtrack became more popular with fans than the movie itself, but a copyright lawsuit killed its chances of US release. Original soundtrack was only released in Japan, making it a rarity among collectors but bootlegs are easily found these days.

No one sleeps through the night in this neighborhood.

Four teenagers are stalked through their dreams by the vengeful spirit of a janitor, and alleged child murderer, who was killed by the teen’s parents, years ago.

This film gave birth to one of horror’s most iconic killers, Freddy Krueger, played by the charismatic Robert Englund, and superstar Johnny Depp, in his film debut; and, it also saved New Line Cinema from bankruptcy, when the film made a killing at the box office. The screech of Krueger’s clawed glove is second most hair-raising sound in horror, the first being, the infamous chainsaw.

This is what happens when you let extra-terrestrials use the phone.

A group of high school students discover some not-so-nice aliens have landed at their school and taken control of both staff and students. 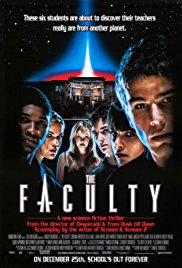 Robert Rodriguez directed an all-star ensemble cast in this sci-fi thriller which was written by Kevin Williamson, veteran TV producer and writer of the popular Scream franchise.  The movie is practically a spoof, with its mash-up of several movies including Invasion of the Body Snatchers, The Thing, and the Breakfast Club. It’s not a great movie but it sure is mindlessly entertaining and fun.

No matter how young you are, when you have a date with death, you’re destined to keep it.

A teenager has a vision of him and his friends dying together in a plane crash. The six escape the accident alive, only to have Death hunt them down, one by one, thus, learning the hard way, you can cheat death, but you can’t escape it.

What started out originally as a spec script for the X-Files TV show became a feature film when intern/screenwriter Jeffrey Reddick submitted it to New Line Cinema, on the advice of a fellow employee. The script was later snapped up by X-Files writing partners James Wong and Glen Morgan, who agreed to rewrite and direct the feature film.  The franchise has gone on to earn the studio approx. $665 million worldwide between the 5 films.

Growing up is a hairy situation.

Years after making a pact to die together, two death obsessed goth sisters have trouble navigating school, boys and other life changing events, when the eldest sister is bitten by a werewolf. 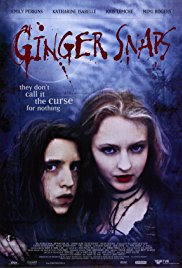 In addition to being one fabulous werewolf film, this Canadian cult classic doubles as a great coming of age film for young women, where lycanthropy serves as a metaphor for puberty. The focal point here is really the relationship between the two sisters, who eventually realize it isn’t the curse that’s making them drift apart, it’s just growing up. The movie, which spawned two sequels, also made stars of Katharine Isabelle and Emily Perkins.

After a succubus possesses the body of a high school cheerleader, she ignores the pleas of her mousy best friend and goes on a killing spree of boys. 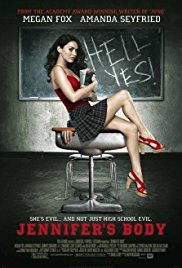 Hot off the heels of the Oscar-winning “Juno”, writer Diablo Cody penned this dark-comedy horror film, starring then-time Hollywood it girl Megan Fox and Mama Mia star Amanda Seyfried. Unfortunately, the film has more beauty than brains, but if you ignore its flaws, it is a lot of fun, and has good performances, even from Megan Fox, who is a little self-aware at times.

A year after her mother is mysteriously murdered, a young teen and her friends are stalked by a killer who likes to use horror films as clues in his deadly game. 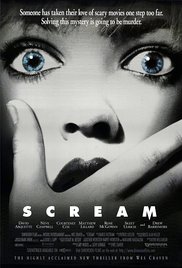 Easily the best of all 90s slasher films starring Hollywood’s biggest teen stars, Scream works both as a horror film and a witty satire. Directed by innovative horror guru Wes Craven, not only is Scream super scary, it has a cleverly written script with great performances. Rarely do horror films hit all the marks across the board. If nothing else, watch for the now iconic opening scene,which is absolutely killer (no pun intended).

A vampire’s revenge is a dish served colder than a Stockholm winter.

Meek and timid Oskar meets a new friend in mysterious Eli, who helps him seek revenge on the bullies at school, but Eli’s own dark secret is in danger of being exposed because of her aging caretaker is having trouble acclimating to their new home town.

Based on the best-selling novel from John Ajvide Lindqvist, Let the right One In was directed Tomas Alfredson, a veteran TV writer and producer in Sweden. The Hollywood remake “Let Me In” starred Chloe Grace Moretz, Kodi Smit-McPhee and Oscar nominee Richard Jenkins. Both versions are good, but I do believe the Swedish film to be the better of the two.

If you can’t trust the government, who can you trust?

Set in a future, a class of 42 ninth-graders are randomly selected to participate in the first ever Battle Royale, a new sadistic legislation passed by the government, where students are dumped on an island for three days and forced to kill each other, until there is only one left standing. 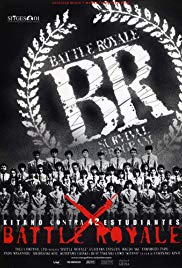 Contrary to popular belief, this controversial cult classic, based on the equally controversial manga, was not outright banned in the USA, although, distributors did stay away due to the plot line of high schoolers murdering each other, particularly after the Columbine incident. It was actually Toei’s high licensing fees, prohibitive rules and legal considerations that made it near impossible to find US distribution. Eventually, it did find its way to the US and Oscar-winning writer/director Quentin Tarantino credits this sci-fi/horror film, from the award-winning Japanese director Kinji Fukasaka, as one of his favorite movies of all time. The movie set the bar for all survival-style films thereafter, heavily influencing films, video games, TV shows and books (The Hunger Games, anyone?)

Mean girls and a wacky bible-thumping momma are enough to drive anyone crazy.

Between her own mother’s bullying and her classmate’s sadistic pranks, all hell breaks loose on prom night, when shy girl Carrie finally unleashes her dormant telekinetic powers.

Thriller maestro Brian DePalma, at the height of his suspenseful career, directed this movie that launched the careers of John Travolta, Nancy Allen and Amy Irving. Carrie was the first of Stephen’s King’s novels to be made into a film. Like the book, the supernatural element was only a part of the story.  It was actually the twisted relationship between mother and daughter that was the most scary. Sissy Spacek (Carrie) and Piper Laurie (Margaret/Mother) were both nominated for Oscars for their terrifying performances.

So, what have we learned today, class?  If you accidentally kill someone, call the police right away; always be wary of the government; don’t be a bully; and don’t mess with death. Stick to these simple rules, and, oh, the places you will go!

What's the most important ingredient in a love spell?
Goodbye January.
Part V of the Blood and Ice haiku series.
Happy Caturday. Stay safe out there.
Happy Friday! BE SAFE OUT THERE TODAY!
Happy 1-Year anniversary to Shadow Grove Brewing @shadowgrovebrewing